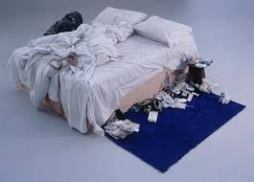 I am part of a group of graduate students organizing the annual Philosophy and Art Conference, at Stonybrook University. Last year, the theme of the conference was “Collectivity.” This year each person defended their favorite theme, we all took a vote, and “Boredom” became a candidate for the theme.

At first I thought this was a terrible theme for a conference. Especially given that most philosophers already get laughed at for embodying boredom pretty well. But I went along with it and hoped for the best. I am now beginning to understand why boredom is a problem in aesthetics, and why it might not be such a bad conference theme after all.

My friend Daniel is a philosophy student at CUNY who has his doubts about contemporary art, In his words:

“While wandering through a modern art exhibit, I sometimes experience a pair of conflicting thoughts: the suspicion that what I am looking at is totally meaningless junk, together with the nagging doubt that since all sorts of perfectly intelligent people have devoted their attention to it and conspired to place it in such a venerated viewing location, there must be something to it.”

So what is going on in his statement? Two issues: The first is that the artworks he alludes to are probably contemporary, and thus, do not have beauty as a primary property or as a property at all. I picked Tracy Emin’s bed as an example, because although her work is charged with meaning to me, many like Daniel may view it as a bed with some garbage over it. The second issue is that artworks such as Emin’s bed, being indiscernible from every day objects, appear to have no meaning, and are thus classified as useless “junk.” I think Daniel’s view is very common and worth looking at. So I first want to say something about beauty, then something about usefulness, and then I will connect these two concepts to uselessness which appears to be one of the causes of boredom. Hopefully this will allow me to clarify the stigma that contemporary art faces.

1) As long as an artwork is beautiful, or has beauty as a property, it can be useless and still have popular approval. Talk to anyone who has gone museum touring around Europe and you will find out that they can handle standing in front of useless art for hours as long as it is beautiful, or has this property.

But I have a better example from literature. I am reading “The Gift of Asher Lev.” A novel by Chaim Potok, about a young boy’s Orthodox Jewish experience in New York. I picked this novel because I’m trying to understand more about orthodox Jewish culture, now that I will be teaching in a Jewish school. But I also think that this novel presents us with an interesting tension between beauty and uselessness. Through the story, the main character struggles between his love for art, and the views of his father, who claims from his religious faith that any form of art not related to Judaism is useless, and a waste of time. In the novel, Asher admires the beauty of artworks despite their “uselessness.” He begins to go to art museums where he studies paintings. He becomes very interested in the paintings, especially the ones of the crucifixions. He starts copying the paintings of the crucifixions and nudes, and this gets him in trouble with his father. Besides the religious conflict going on here, I think Potok’s character believes that beauty has value in itself, thus, he cannot see the “uselessness” his father perceives. This is also an example of how beauty appears to be a necessary condition for useless art. That is, as long as an artwork is beautiful, or has this property, the majority of audiences can accept the fact that it is useless.

2) As long as an artwork has a purpose (political, ethical, affective etc.) that provides meaning or usefulness, it can afford to be non-beautiful, or recede from having beauty as a property, and still have the approval of the general audience.

In Potok’s novel, for example, Asher’s father makes usefulness a priority and, coming from a religious perspective, claims that only art that divulges salvation is useful. And from a militant front plenty of political artists have claimed that either art should be political or else a mere decoration: a useless ornament. Interestingly, a lot of religious and political art centers on suffering, themes which are not in themselves beautiful but might have some ethical, religious, or political purpose. So here, purpose, meaning, and usefulness are necessary conditions for non-beautiful artworks to be approved by the general audiences.

Now, the problem rises when we encounter works like the ones Daniel mentions. Apparently, these items do not have beauty as a property, and when we cannot for sure decide if the work has any sort of political, ethical, or affective purpose, these get classified as “boring,” “junk,” “useless,” “bullshit” etc. So the problem lies with the encounter of works that have no beauty, and apparently, no purpose either. Thus, they are useless. This is also how uselessness gets connected to boredom, the main theme of our conference.

I wonder how Potok’s character would have reacted to the contemporary art world given that his defense of art is primarily a defense of beauty.

And here lies the stigma of non-beautiful, non-useful art.

How many audiences that enter the Guggenheim daily have uttered these statements? “What is the point in this?” or, “This is bullshit,” or further “My little sister could have done that.” And lastly, “I am bored in this museum; can we go have a sandwich now?”

(I have to admit that I am guilty of this last statement.)

So boredom appears to be a problem within aesthetics because, as I wanted to show, it is directly connected to the stigma of uselessness that non-beautiful, contemporary art has to face. That is, if the work cannot prove its purpose, or its meaning, then it is sadly categorized by the audience as another “junk” artifact.

And yet, hopefully for artists and for philosophers of art, artworks escape most logic because although they appear useless, they are indirectly useful. I recently read an interview with Christian Boltanski, one of my favorite French sculptors, who explains this humbly and better than I can. Here, Boltanski defends the purpose of useless, non-beautiful art. I am translating one of his responses from Spanish:

“I am a professor in the School of Fine Arts, in Paris. What I tend to argue is that if I like teaching there, it is precisely because the School of Fine Arts is the most useless place in Paris. It has no purpose whatsoever. And in this world, almost everything is useful you see. People study to be businessmen, doctors…to be a doctor you must learn something precise. And in the school of Fine Arts I have a few students, and we talk about things that are completely useless. We talk about the color of the sky, about a spot on the floor…And talking about useless things is so strange, and naturally, in the end it is the useless things that are the most useful. I think that museums are full of useless things. In art schools one does nothing more than talk about useless things, but then the only places that contain this paradox are churches for example. Churches are useless and it is precisely this inutility that makes them useful, because there is no direct objective to them. For example, in a restaurant one eats; but in a church one waits, one reflects, but one does not have a delimited objective. I think Art is so wonderful because it is not directly useful. This is not completely true. But partly, this is true.”

Moral of the story: Be careful when you stand in front of a piece of useless junk in a museum, it might be the most useful, wonderful piece of junk you will ever encounter.

I am a trained philosopher but usually make a living teaching middle school or writing Spanish scripts for Youtube. I get hung up on things. So here is my writing about whatever I'm hung up on in the moment. I'm from Argentina and my style of writing might have too many run ons for you. Consider that too.
View all posts by Are You Hung Up →
This entry was posted in Philosophy about Art. Bookmark the permalink.