Between presence and absence: How does the body perceive the world after a loss? 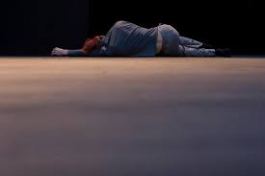 I recently re-read Merleau Ponty’s writings about embodiment and perception, and think he has a lot to say to us about the way our body adapts to the world after a loss. While in “Eye and Mind” the central claim is that vision is more than thought, in “Phenomenology of Perception” Merleau-Ponty argues that the body is more than the sensible.

The case of the missing limb provides us with a good example to reconnect, or revisit the affective dimension of the self through the notion of embodied memory. The case goes like this: A soldier is injured in battle and his arm is torn and shattered by splinters. His arm is amputated but he still feels it as if it were a part of his body. Merleau-Ponty writes that “a man wounded in battle can still feel in his phantom arm the shell splinters that lacerated his real one.” (p. 88) He feels the arm resting on top of his chest when he lies in bed; he sees doorknobs and feels how his now absent arm leans forward to open the door. And the world as he knows it still responds to his body as if his arm were still there. Eventually, when the world is reconstituted so that it corresponds to his new way of occupying space, the phantom limb disappears. The phantom limb case is just another example of how the self continuously escapes through the cracks of the strict categories of presence and absence of the objective world.

The case cannot strictly be explained by alluding to psychology, and yet a physiological explanation would also be insufficient. Later, in “Eye and Mind” Merleau-Ponty refers to our own image in the mirror and explains how a strict Cartesian model of thought, would only conceive of this image as “a dummy,” an effect of the mechanic of things, or a specter that is not precisely coming from inside our minds but from an outside. The phantom limb that is still felt in the body long after the arm is gone would also be, under this traditional model of thought, unexplainable- a ghost.

“How crystal clear everything would be in our philosophy if only we could exorcise these specters, make illusions, or object-less perceptions out of them, and keep them on the edge of the world that does not equivocate!” (Eye and Min p. 169)

But of course we can’t, because in some way, these specters have affected us, still affect us. Here I think, Merleau-Ponty’s phenomenology can allow us to move away from the largely cognitive dimension of experience through which we think of art and move towards an affective experience of art. Merleau-Ponty remarks that we cannot explain this case, these ghosts, if not by alluding to a state of memory and emotion that call up this phantom limb.

“if we put back emotion into being-in-the-world, we can understand how it can be the origin of the phantom limb. To feel emotion is to be involved in a situation which one is not managing to face, and from which, nerveless, one does not want to escape.” (p. 99)

This medical case about loss might also allow us to understand the process of grief and its relationship to the embodied self. For example, we do not understand the absence or the death of a friend until the times comes when we expect a reply from him and when we realize that we shall never again receive one. In this case, pretending that the friend is still around and denying the loss, or feeling his presence long after the loss, are both modes of representing the world that go beyond the presence/absence categories. Merleau-Ponty explains how in such a case, at first we avoid asking in order not to notice this silence, we turn away from areas in life were we might meet this nothingness, “but this very fact highlights, necessitates that we intuit them.” (p. 93). So the subject, caught up in the dilemma of having lost a part of himself “breaks in pieces the objective world which stands in his way and seeks symbolical satisfaction in magic acts.” (p. 99)

After the sudden death of her husband, Joan Didion wrote a famous memoir titled “The Year of Magical Thinking” were she presents us with an account of her grief. I think this short passage provides us with an example of how grief is an affective process that breaks apart the categories of presence and absence. But also, how writing as an expressive form is always more than thought because one writes about perception.

“Of course I knew John was dead. Of course I had already delivered the definitive news (…) yet I was myself in no way to prepared to accept this news as final: there was a level on which I believed that what had happened remained reversible. That was why I needed to be alone (…) I needed to be alone so that he could come back. This was the beginning of my year of magical thinking.” (p. 33).

These “magic acts” that Merleau-Ponty alludes to in the case of the phantom limb become rituals of habit when a part of our world is gone, and thus, a part of ourselves appears to be caught in between the categories of presence and absence until we manage to restructure our world. When the patient who lost his limb restructures his/her world in such a manner that the things in the world do not beckon to the lost limb, then the experience of it vanishes. But until then, the consciousness of the phantom limb remains itself unclear. The man with one arm feels the missing limb, same way as I feel keenly the existence of a friend who is, nevertheless, not before my eyes. The patient has not lost his arm because he continues to allow for it. So the phantom limb is, not a representation of the limb, but rather the ambivalent presence of the limb. Merleau-Ponty concludes from this case that “the psycho-physical event can no longer be conceived after the model of Cartesian physiology” that considers though and extension as separate modes because “the union of soul and body is not an amalgamation between two mutually external terms, subject and object, brought together by arbitrary decree.” (p. 102). Instead, what the phantom limb case shows us is that the body is more than the mere sensible, more than a mode of extension and cannot be reduced to it. Merleau-Ponty concludes by stating that “the awareness of the amputated arm as present is not of the kind “I think…” Only once the memory stops affecting my daily experience can I restructure my world.

Without attempting to solve the ambiguity, the affective dimension of experience that still haunts the patient with the splinters in his long gone arm, can allow us to re-think how we categorize presence and absence. It may also allow us to think about the body in broader terms that connect to art, but also to an ethics of the other. So far as memory and emotion can call up the phantom limb, this is not comparable to the action of a thought necessitating another thought. But rather an existential attitude motivates another and “memory, emotion, and phantom limb are equivalents in the context of being in the world.” (p. 99).

I am a trained philosopher but usually make a living teaching middle school or writing Spanish scripts for Youtube. I get hung up on things. So here is my writing about whatever I'm hung up on in the moment. I'm from Argentina and my style of writing might have too many run ons for you. Consider that too.
View all posts by Are You Hung Up →
This entry was posted in Poetry. Bookmark the permalink.

1 Response to Between presence and absence: How does the body perceive the world after a loss?